Home Commentary Destiny: Review Roundup and why they aren’t wrong

Destiny: Review Roundup and why they aren’t wrong

DISCLAIMER: This article is the opinion of the author, and no one else. I’ve played though the game, and have a level 21 Titan. I enjoy Destiny overall, but, I feel it has many more flaws than it should. This is not a review of Destiny, rather my opinion on why the lower review scores are justified, and what I thought of the game. This is not an attack on Bungie or Destiny in any way. Thank you and enjoy!

As you may have noticed by now, Destiny reviews have slowly started cropping up around the web. And some, especially from larger sites, have been pretty low for a game with so much hype surrounding it. For an example of this, just take a look at the following reviews.

Despite these less than stellar review scores, there are still many good review scores. But, to me, the bad reviews are the ones that hold more truth.

Destiny, overall, is a good game. The visuals are very impressive, the combat is interesting, controls responsive, and it is just fun. But, it feels very hollow. Just taking a glance at the game, it looks amazing. Which is why the game was so hyped up from the start, and why the Alpha and Beta trials were so enjoyable. But, getting my hands on the full game, I realize this is another Watch Dogs. The hype was to high, and it’s clear the game is not what it was originally thought to be.

This is not to say the game is bad. Because it’s not. As I said above, concepts and mechanics are solid, and the game is fun. These are the major selling points of games to me. But, the game feels as though it was thrown together to quickly. I’ve played through all story and strike missions, as well as the PvP (Which I will talk about further down). I’m currently sitting at level 21. And I already feel as though I’ve seen and done everything.

Destiny has lived up to some of the fun it offered, but it fails to deliver on a number of others. For example, the number of worlds is disappointing. There are only 3 planets and 1 moon you can actually do missions on. And not that many missions on each of them. And, the area you can explore is no where near as large as we expected. This is best shown in the below video. (Credit to the destiny subreddit, post here.) 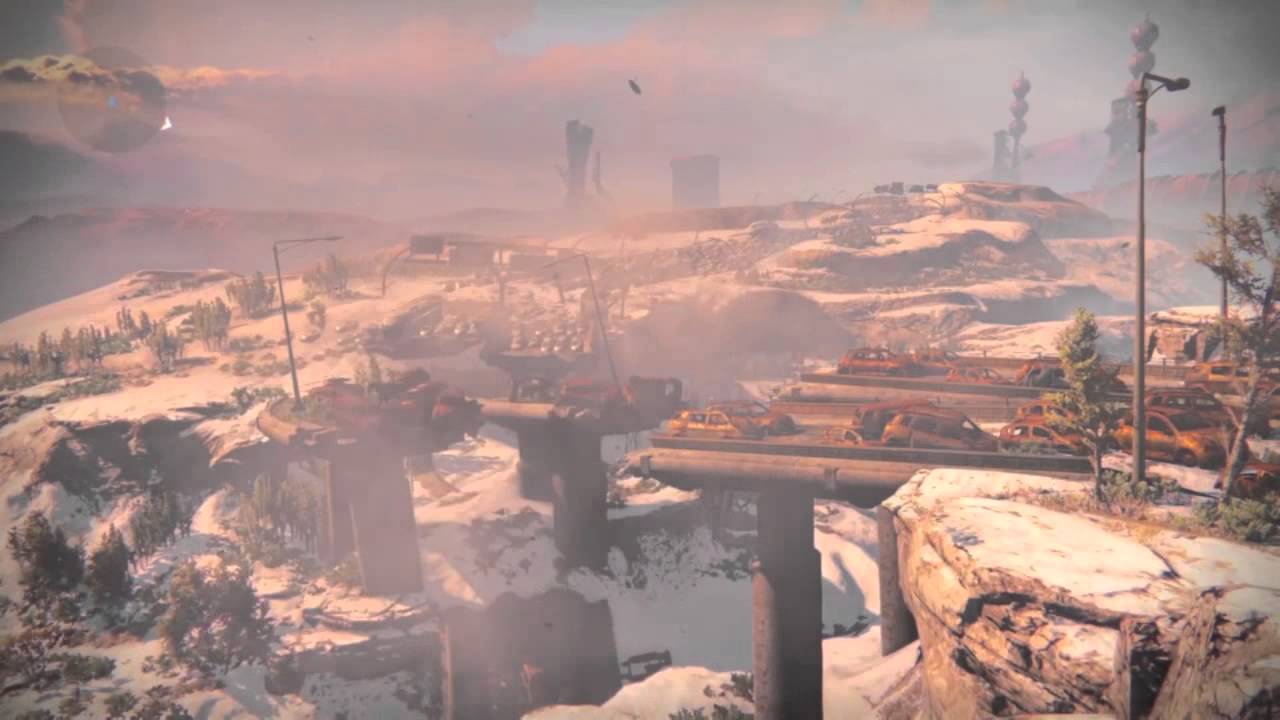 The endgame is also very lack luster. Borderlands, a game much like Destiny, not only has an upwards of 70 levels for your character, but also a New Game Plus mode, which allows you to redo all missions with tougher enemies and better loot. But this system is absent in Destiny. Even the process to level up beyond 20, the “level cap” in Destiny is boring and tedious, and simply relies on luck and dedication to farming loot. The only things you really gain by beating the main story of Destiny are a rare weapon as an end game reward and the Strike Playlist. And if Bungie were to add a New Game Plus option/mode, end game problems would be solved for the most part.

My major problem is that content overall is lacking. Both in story and general activities. On the 3 planets and 1 moon you can visit, there is 1 side mission, called a “Patrol.” Except on Mars, where there are 2 side missions which are not required to do. And then each location has 1 strike mission, with Venus having 2. Guns and armor are varied, but you’ll find an end to the varieties. And story within the game is another thing.

Story is pretty much non existent within the game itself, except for the occasional short cutscene. You get a quick little overview of what’s going on, but that’s all. If you want to get all the story, you need to exit the game and go look at Grimoire Cards on Bungie’s website. This would be okay if it were to look at the deeper lore, but I don’t feel I could confidently explain the story of Destiny to anyone, because I don’t think I saw any solid information throughout the whole game other than go shoot this guy because he’s bad. Even at the start, when you first meet the speaker at the Tower, he begins to speak about why the Traveler came to Earth, as well as a few other bits, as if he is going to explain things. But, he then stops at giving you more questions, leaving the player wondering what is going on, and claims that you will find out later. And you don’t.

The game simply feels like it has an attitude of “It doesn’t matter why you’re here, go shoot that guy.” Story is there for those who want to spend the time reading up on it, but in game, it’s not readily apparent. And being Bungie, the original creators of Halo, I can’t understand the thinking behind it.

Even your individual character is also unimportant tot he world, apparently. I understand that it’s readily apparent that there are many other gaurdians, but you hold no importance at all in the world. Even after the final mission, you are not acknowledged in any way. The Speaker holds a ceremony for Gaurdians, but your character isn’t even in the same area to be congratulated.  It just feels very anti-climatic, a sudden stop really. It doesn’t feel like a true Bungie game.

So much in the game seems like it’s directly based off of Halo and Bungie’s past, from the AI like Ghost who is with you at all times, to the Religious Fanatic Aliens, Infectious Living Dead, to the way vehicles and weapons handle(Not 100% sure, but the shotgun animations look very similar to those in Halo Reach). But the best parts of Bungie’s past games are not present. And don’t get me wrong, I’m glad they have gone in a new direction and not just made a blatant Halo copy. But, they ignored the parts that worked so well for them. These, to me, being story and Competitive Multiplayer.

And this brings us to the abomination they call “Competitive” multiplayer. I’ve been trying to give it a shot, over and over. But I can’t do it. Destiny’s PvP feels insanely unbalanced in so many ways it seems as though it was just added as an after thought or just to please fans who focus on PvP at the last minute.

Each class can use their individual abilities. But, the problem is, these abilities were designed to look good in PvE/Co-op. And they are not balanced for a competitive multiplayer. From the Titan’s Fists of Havoc which obliterate anyone unlucky enough to be near the area to the Hunter’s Golden Gun which summons a flaming revolver that kills in one hit. On top of this, the weapons are not balanced either. From the time I’ve spent, I have found that unless you are using an Automatic Rifle or Sniper Rifle, you’re at a major disadvantage. I’ve mowed through 3 eneimies at once with an assault rifle easily, but it’s tough just to get one kill with a revolver or pulse rifle. And it just feels as though the damage doesn’t add up. Sniper Rifles kill in 1 to 2 hits from any range, but a shotgun has difficulty even when used a close quarters. It’s very outlined that Assault Rifles and Snipers are the way to go from the start, regardless of a player’s skill level.

On top of this, the maps are very forgettable and poorly designed. It’s hard to believe that Bungie made this PvP, because after their work on Halo, I don’t see how this could have come out in the state it is.

Destiny is a good game, with great mechanics and concepts. If you’re buying it to enjoy the PvE/Co-op portions, and are okay with a little loot farming, you’re making a good choice, and it’s worth a $60 purchase. But, if you’re looking for Competitive PvP, a main campaign loaded with story and deep lore, or a lot of end game content, you may want to stick with Halo: The Master Chief Collection and Borderlands the Pre-Sequel for now, or until Bungie does something to address these concerns.

Polygon said it best with their wrap up, that “Destiny suggests potential it never realizes.”

But, what do you guys think of this? Do you agree with what I said above? What do you disagree with? What do you hope Bungie adds in the future? Leave your thoughts below. And remember, stay tuned to Gamer Headlines for all of your Destiny and gaming news!