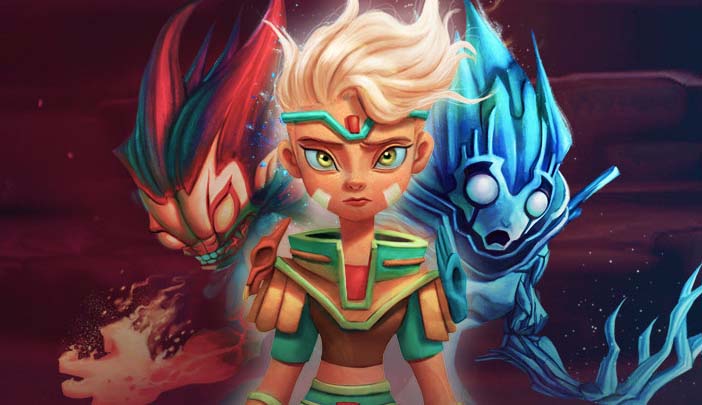 Red Goddess: Inner World is a Metroidvania-inspired 2.5D side-scroller for the PlayStation 4, PS Vita, PC, Mac, Linux, and Wii U that can be yours for $14.99. The game is a Kickstarter success, receiving $40,235 and surpassing its $30,000 funding goal. The story follows Divine, a girl who must explore her Inner World to find crystals in order to retrace her memory. 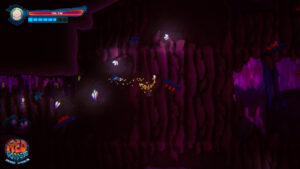 As per the standard of most Metroidvania’s out there, the character starts off with little to no abilities. As players progress, new powers and other talents will come to aid to get through increasingly difficult platforming areas. Early in the game, players will encounter two different transformations that act as the basis for combat scenarios. Rage, a red fire demon-esque transformation, will allow Divine to take out red enemies. Fear, the blue transformation, will likewise allow Divine to beat down blue enemies. This is when the game starts to segment itself into either platforming or combat-heavy sections.

Since combat is given its own piece of the pie, it feels like there should be a bit more depth to it. It can be described as simple as matching colors. Use red for red and blue for blue. There isn’t much players have to take into account in order to come out victorious in each battle. Match colors, tap Square repeatedly, learn how to dodge, and throw a special move in there after unlocked.

Boss design in Red Goddess is rehashed throughout the game. It doesn’t mechanically change once throughout the entire game, except they may take on slightly different appearances. However, the final boss is quite the spectacular event. This was the first time where I felt the combat mechanics meshed together to utilize their full potential. It was a hectic yet exciting experience that was easily a great send off.

An annoyance that is unavoidable throughout the game, unless you are some kind of a robot, is that whenever you take damage, you are knocked down on your back. It becomes incredibly frustrating when enemies can stun-lock Divine and nothing can be done about it. This slows down what could be faster-paced combat. It makes dodging feel more rewarding, but getting hit is almost inevitable in most combat engagements. 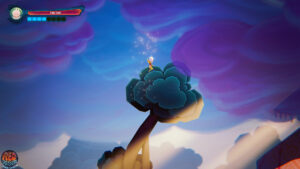 Dying in Red Goddess: Inner World will happen regularly. Some challenging combat sections coupled with one-hit-death platforming areas can and will likely induce your own rage transformation. The respawn time in Red Goddess is lengthy and can really draw on you in the game’s more difficult segments. Aggravation becomes heightened when multiple deaths are to be expected. Insult is added to injury when a checkpoint occurs before a cutscene. Cutscenes cannot be skipped. If a difficult area is punishing you over and over again, you will have to sit through the same cutscene each time you respawn.

Scattered throughout Red Goddess are collectibles in the form of coins and crystals. As you have may guessed, coins act as the game’s currency and are used to buy mana and health upgrades. Special abilities that you gain throughout the game will eat away your mana. Crystals are an absolute necessity in order to progress. They act as keys to gain access through gates. Instead of utilizing power-ups to unlock new areas, like in games such as Metroid, these crystals are the foundation of all progress. Your abilities come into play to obtain these crystals.

From a linear standpoint, Red Goddess: Inner World does quite well with natural progression. You won’t find yourself going too far out of the way to snag that necessary crystal. There is even enough coin along the journey to fully upgrade your stats without much problem. If you happen to miss a crystal, you will need to do a small amount of backtracking. However, they are all marked on your map from the beginning of the game, so if you are keeping track of things you shouldn’t have a problem. The game is designed in a way that in order to progress, you should have the exact number of crystals you need.

Red Goddess: Inner World is certainly not without its technical issues. The game is very pleasant on the eyes, but the frame rate often comes to a crawl throughout the game. Precision platforming and erratic frame rate don’t mix well with one another. Sometimes the movement in the game would come to a sudden halt, leading to a sudden death. This becomes an added annoyance that may rub players the wrong way, especially in the more difficult end-game areas.

PlayStation owners who like to do some Trophy hunting in their games will be able to rest at ease with Red Goddess. You will likely unlock every Trophy during your playthrough if you make notice of the requirements. Most are story-driven though, however it is important to note that there is unfortunately no Platinum Trophy.

Red Goddess: Inner World is a small but challenging Metroidvania-inspired Platformer. Those who are turned off by difficult Platformers probably won’t find solace in Red Goddess. However, those who are up for a bit of an exercise in platforming skill will be pleased with the game’s later areas. The combat doesn’t quite feel as fleshed out as it could be, which is a bit disappointing, but it is decent enough to not get bored with. Red Goddess: Inner World seems like it wants to be much more, almost like a bird with wings that don’t yet provide flight.

The guys over at Invader.com celebrate their 18th anniversary

We provide you with the latest breaking news and videos straight from the entertainment industry.

The guys over at Invader.com celebrate their 18th anniversary